Version 2 is on the works. Watch this space for news. Current state: Documenting and adding last features.

Follow these directions carefully. Complete the several Step by Step Guides in the first place, then check the rest of the sections. There's a Troubleshooting section at the end. Before asking for help, check that your problem isn't one of the problems described in there. There's a section in this documentation meant for advanced users. Its purpose is to provide more concise and to the point information so they don't have to wade through long tutorials. Still, having a look at the step by step guides is recommended.

License of Use: Click here to read the License of use.

What's included in your purchase

Check that your box contains the following assets:

If any of these is missing, contact Auryn Beorn for a replacement.

Step by Step Guide: The auxiliary tool (Let's start with a box)

Let's begin by rezzing a box. Write t;myBox in its description field, as the image shows: 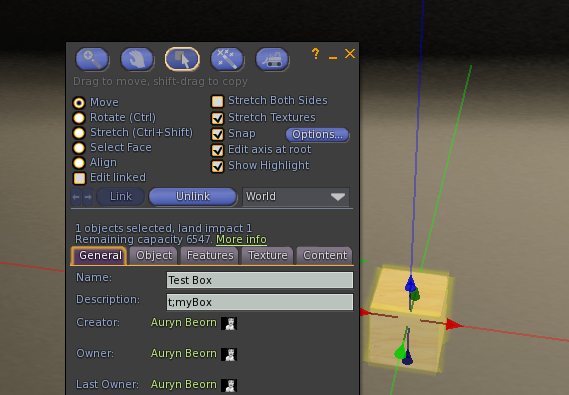 Set a different color to each face of the box. For example: 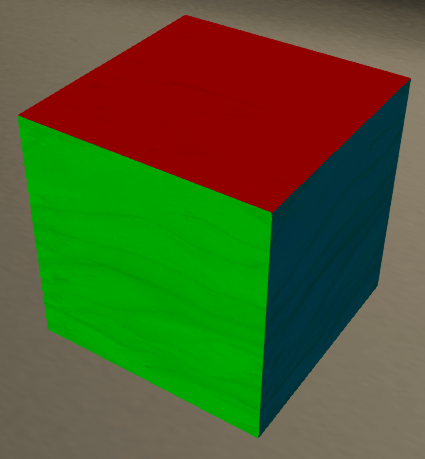 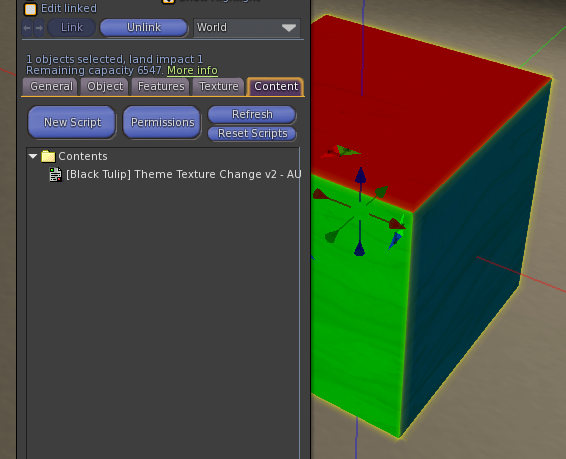 Click on the box to get the auxiliary tool menu. 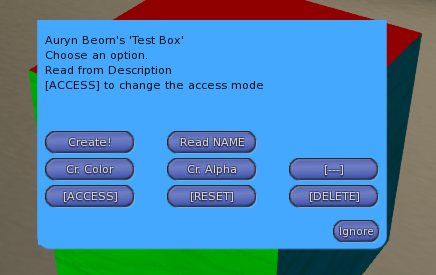 When you open the link in your browser, you will have text like this one:

Select the text. CTRL C to copy it. Now create a notecard named:

and paste in it (CTRL V) the text you've copied from your browser. Your notecard will look like:

Let's color our cube, all of it, white, and then select the Blank texture so the cube is entirely white with a white texture. 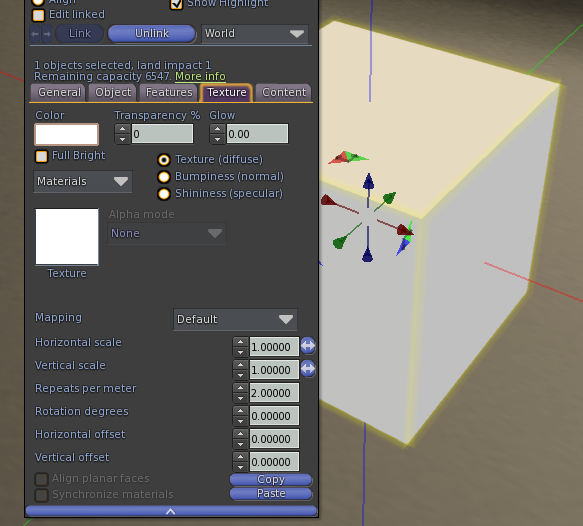 Bring up again the auxiliary tool menu if you don't have it already up (or if it expired), and click on "Create!" for the new texture theme data. 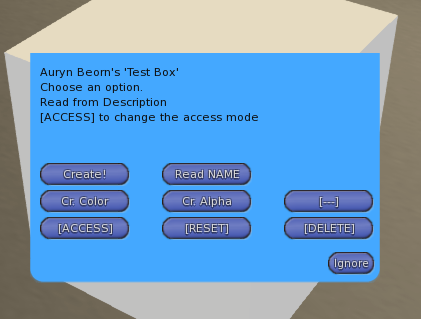 Save the new output in a notecard named:

Now texture the box so the Default (plywood) texture is set, and the top face is tinted black: 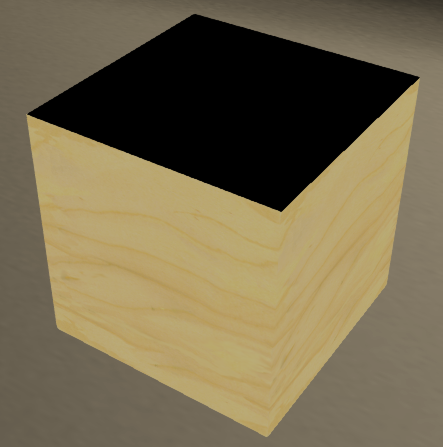 Run again the auxiliary tool, and copy the (web) output in a notecard named:

We have three theme texture notecards, enough for our next important step, so bring up again the auxiliary tool menu: 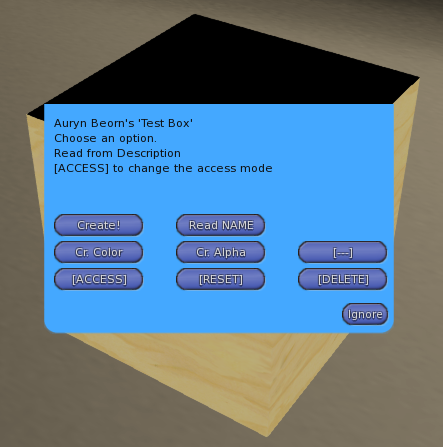 Hit on the "[DELETE]" option, and confirm. This will delete the auxiliary script from inside the box. We don't need it anymore once we've created all of our notecards.

Now we change in our inventory the permissions for Next Owner of the [Black Tulip] Theme Texture Change v2 script as follows:

Drop the three theme notecards that we've created, then the [Black Tulip] Theme Texture Change v2 ~CFG~ configuration notecard included in your package. Once this notecard is in, we drop the main script into the box. It is important doing it in this order. 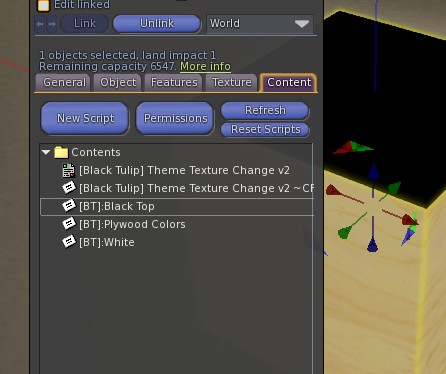 Click on the box and select one theme from the options we get on the buttons. The texture changes accordingly to the theme: 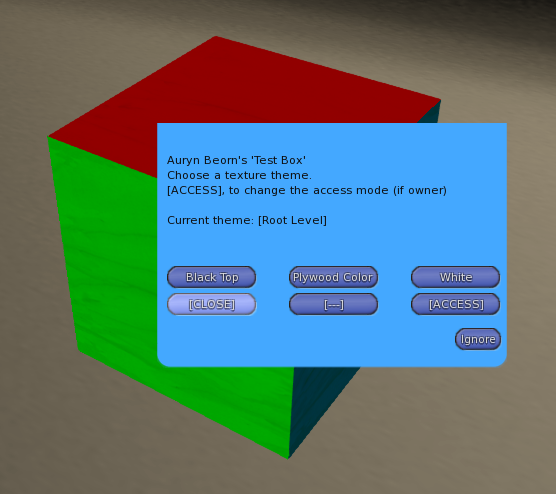 We're completing this first section by learning how to create themes that will affect only to some faces, but not all of them. This means that the faces not involved will keep their texture on, whichever this is at the moment of selecting the theme that only changes some but not all faces.

Delete the main script and drop again the auxiliary tool in the box.

Let's change the box's texture so: 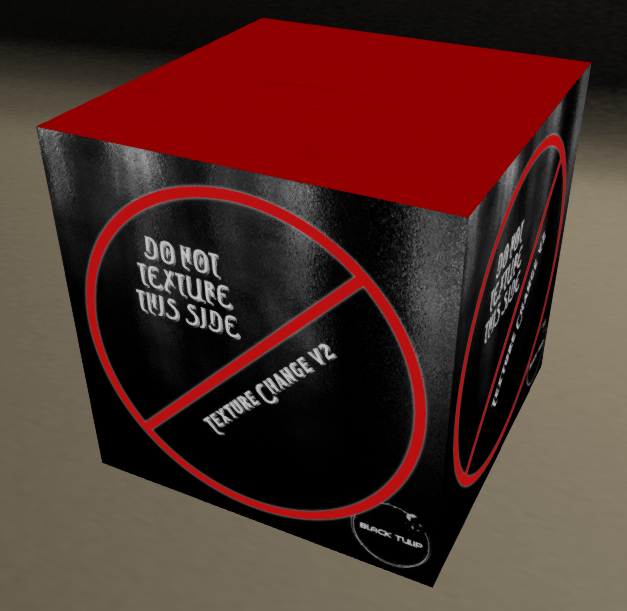 with the contents of creating this new theme. Delete again the auxiliary tool.

Now drop this notecard in the object, and the main script. Try some texture changes (for example, try "White") and then the theme that only changes the top face to a red color.

Repeat these steps as many times as necessary, and then let's continue the tutorial in the next section: The auxiliary tool (Now with a table and a chair). Check the [Black Tulip] Test Box included object to see the finished example (This item is inside the [Black Tulip] TTCv2 - Items for Tutorial box/folder).

IMPORTANT: When you want to write the t; block, but there's text already that needs to be there.

IMPORTANT: If we're reading the name, we have to specify this in the configuration notecard of the script. We see how when we talk about all the notecard parameters.

IMPORTANT: The t; blocks are like this: t;identifierChosenByUs. If you have more than one texture-change prims, each one must have something DIFFERENT as "identifierChosenByUs". For example, t;legs and t;top if we're talking of a table.

Write the following text in the description field of the table:

Texture the legs with the [Black Tulip] Do Not Texture This Side texture so your table looks like: 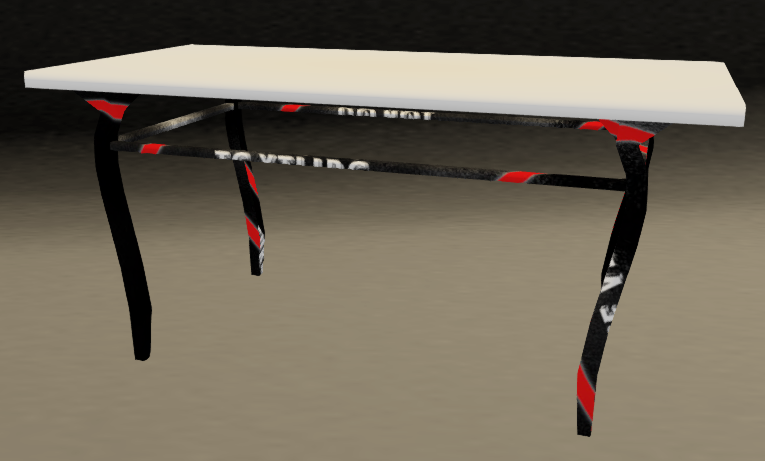 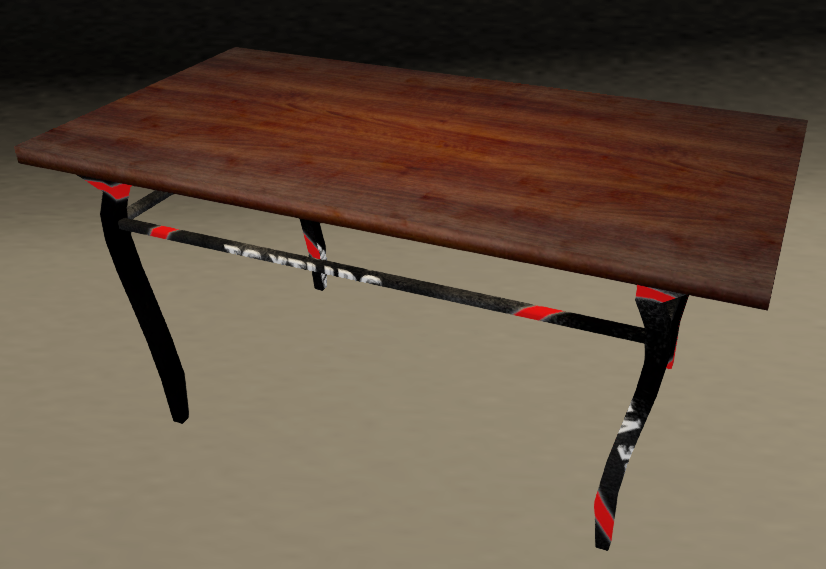 Create a notecard named [BT]:Top:Dark Brown to copy the output of the script. Proceed similarly with the other three [Black Tulip] Table Top - textures, and create theme notecards with the same structure: [BT]:Top:COLOR. At the end of this, we have four notecards named: 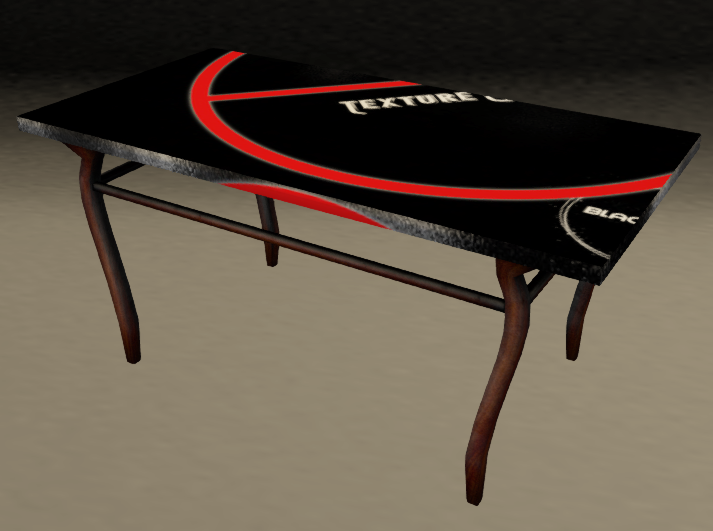 Create a notecard named [BT]:Legs:Dark Brown to copy the output of the script. Proceed similarly with the other three [Black Tulip] Table Legs - textures, and create theme notecards with the same structure: [BT]:Legs:COLOR. At the end of this, we have four notecards named: 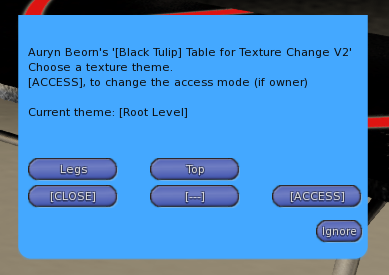 Notice that instead of having the names of the eight notecards as buttons, we only have two options: Legs and Top. Let's click on "Top" to get a menu like this one: 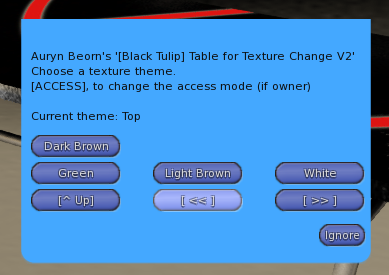 Now we have specific color choices, and the menu is telling us that we're in "Top" as "Current theme". Select a color, "Dark Brown" for example, and see how only the top of the table is changing its texture: 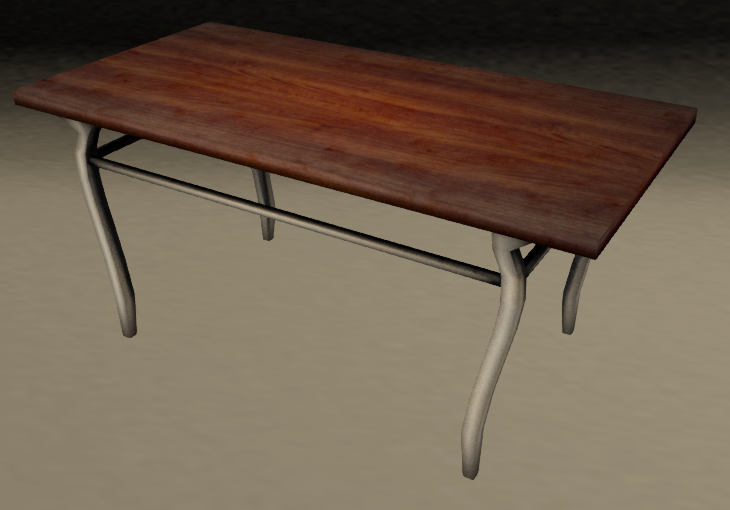 We can go back to the previous menu and select "Legs" to then go through the texture choices for the table legs.

The important thing here is to realize how we've constructed submenus in the menu: By writing a : character to create the menu structure. For example, the notecard named [BT]:Legs:Green is creating a submenu called "Legs" and then "Green" is the texture option to select.

In order to consolidate this knowledge, proceed similarly and create texture notecards for the [Black Tulip] Chair for Texture Change V2 sample object, with submenus called "Wood" and "Seat". Then complete the setup to have a finished scripted object.

You can also create themes for specific combinations of Wood/Seat or Top/Legs textures, and assign them to their own menu: try it!

When you feel comfortable with creating themes in all the ways we've seen, move on to the next section to learn about the configuration notecard.

IMPORTANT: New number for BUTTON and ADJUST in AVsitter 2

As a consequence of unifying the style of BUTTON/ADJUST numbers through all of the new Black Tulip scripts, this version of the texture change has a NEW value to use in both the BUTTON and ADJUST lines: -31400100

This means that now our BUTTON and ADJUST lines will look like this:

Store owners may want that their items on display go back to a selected texture theme after some time has gone by. This helps in having your store display everything with a consistent theme, not having to worry about the test choices your possible customers will make. The parameters we explain now are to be used only in your store. Your final product doesn't need them and values can be empty.

Remember: These three parameters are not meant for your final product! These are only for the store/event display items. The final product should have them with empty values.

The use of this script consists of three steps:

The configuration notecard: Advanced use

Ever wanted to be able to change the texture of your object when a pose is selected? Now this is possible with the Poses Add-On.

Make sure in the first place that you drop the [Black Tulip] Theme Texture Change v2 - POSES ADDON before you drop any other scripts.

The first one, TexturePose, defines what textureNotecardToLoad when the pose nameInMenu is played in AVsitter. Notice the pipe character | used to separate both values.

You can use as many TexturePose lines as you need.

The second one, TexturePoseDefault, defines what textureNotecardToLoad when a pose is selected and it doesn't show in any of the TexturePose lines.

This section is for scripters only. It describes the commands you can use with linked messages and llRegionSay commands in order to perform several functions. You need a good understanding of LSL to continue with this section.

Q: I've added the ADJUST line in AVpos, but the button isn't showing under [ADJUST].

then you need to modify the ADJUST line like, for example:

If your AVsitter 2 doesn't admit this format, it is likely that you're using one of the first versions of AVsitter 2. Update to the latest version to have all of AVsitter's features - including this one.

Q: I've set up everything, but only one prim changes its texture.

A: Make sure that you've given different identifiers to your descriptions/names. Make sure they're consistent, i.e., that it's either all in descriptions, or all in names. They can't be mixed.

Q: I've set up everything, and all prims but a few change their texture.

Q: I've set up everything and when using the texture menu, some (or all) the textures are gray.

A: Make sure that you've assigned t; blocks to either descriptions or names and that you're using the correct mode (description/name) in the auxiliary tool.

Q: I already have a description/name in this prim, what do I do?

A: Remember, you can separate the description/name in sections by adding a # character and then the t; block.

If after having followed the directions and checked the troubleshooting list, you have problems making the script work, please click here for the customer service form.